Created 1-Apr-13
Modified 17-Jun-13
Visitors 223
24 photos
Born and raised in Portland John King first took a serious interest in photography during a high school film photography class. While pursuing his BFA in multimedia design at the University of Oregon, he saved up and bought his first digital camera: a fancy 1-megapixel Kodak. It was also in college that he was introduced to ultimate frisbee. John played with Ego for 3 seasons, culminating in a loss in the national championship game in 2003...so close :)
After graduating and moving back to SE Portland he began to photograph ultimate tournaments around the Northwest. Most of his free time is spent with his wife and two young daughters, but he sneaks away to play on a mixed ultimate team each season. John does corporate photography and videography as a profession, but sports photography is where his real passion lies.
Please give a Like to his Flatball Photography Facebook page.
Categories & Keywords
Category:Sports
Subcategory:Ultimate
Subcategory Detail:
Keywords:
© UltiPhotos, LLC 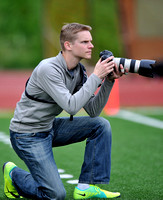