Created 7-Jan-20
Modified 14-Jan-20
Visitors 15
26 photos
Kristina started playing ultimate frisbee in college at UC Davis in 2010. She played 5 years for Davis Pleiades/Rogue and then continued playing Mixed club for Capitol Punishment and then Alchemy. Despite being known for her frequent layouts and playing ultimate for 10 years, Kristina doesn’t have a single photo of herself laying out, through a series of misfortunate events of blurry photos, out of frame layouts, and even lost and corrupted files! This makes having the opportunity to capture and present someone with their first layout shot all the more special to her.

Kristina started sports photography when she shot for her college newspaper "The Aggie" in 2011. However, it wasn’t until 2017, when sidelined by injuries, that Kristina decided to photograph her Ultimate team during tournaments. This reignited a passion for sports photography, and for shooting Ultimate in particular. Kristina has been shooting for UltiPhotos since January 2018, and has had the opportunity to shoot two consecutive Club Nationals, as well as many other smaller tournaments.

Kristina is particularly passionate about increasing the representation of women in sports through photography. Her biggest goal is ensuring women and girls feel valued for their athleticism and skill by seeing themselves and others represented in photographs.
Categories & Keywords
Category:
Subcategory:
Subcategory Detail:
Keywords:
© UltiPhotos, LLC 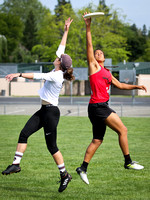