Created 2-Feb-13
Modified 12-Feb-20
Visitors 756
23 photos
Jolie J Lang was introduced to ultimate in 2009, when she was attending Ramapo College and majoring in photography. Her entry-level DSLR and kit lenses accompanied her to every RC Hammer tournament, and she was officially hooked. Upon graduating, she landed a gig with UltiPhotos - not just as a photographer, but as the new Manager of Operations! A whole dream come true.

In 2014, Jolie became the full-time Managing Director, overseeing the day-to-day operations of UltiPhotos as it grew exponentially. By 2019, she had covered 5 world championships across 4 countries, countless USAU national championships across all divisions, NUTC camps, MLU games, and more. She made plenty of friends along the way and values the incredible experiences she had.

In 2020, Jolie stepped down as UltiPhotos' Managing Director. She still plans to shoot ultimate with UltiPhotos, though on a smaller scale. These days, she works as a librarian and is enrolled in a Masters program. In her spare time she loves to garden, read, and play pickup. 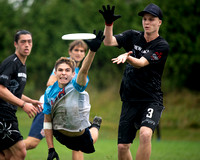 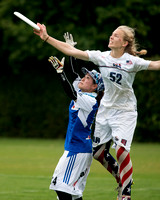