Created 14-Jul-14
Modified 14-Jul-14
Visitors 1456
21 photos
Neil started playing Ultimate in 1992 at university in New Zealand but it took until Perth 2006 for his first visit to a Worlds tournament with Tuatara, the NZ Masters team. Unfortunately sidelined on the first day by an existing knee injury, he took the chance to throw himself into the photography role and since then has been an official photographer with nzsnaps.com for all of the worlds events since in Vancouver, Prague and Sakai.

Now in 2014 he joins UltiPhotos to cover World Juniors and World Clubs in Lecco, Italy.

Although the knee is now well and truly recovered, and even at 42 he still plays regularly, his involvement in the elite level of the game is firmly based around photography now. 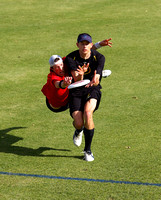