Created 6-Feb-13
Modified 16-Feb-13
Visitors 793
49 photos
Scott Roeder is a professional photographer from Alameda, California, who began shooting ultimate while attending college during his sophomore year at the University of California Irvine. His interest in sports photography in combination with playing the sport himself naturally led him to develop a constant habit of shooting ultimate.

Since beginning his career as a player in 2005 on his Highschool team "Dark meat", Scott has played competitively in the college and club divisions.

Scott has worked with USA Ultimate, formerly UPA, and served as the Official Photographer for multiple Club and College Championships. In addition his ultimate photography has also been featured in USA Ultimate Magazine, Boulder Magazine, Cultimate, and many other team websites.

Become a fan of Scott Roeder Photography on Facebook to find out what he's been working on and to get some awesome photos sprinkled in your news feed:
www.facebook.com/ScottRoederPhotography

You can check out what Scott is up to here: www.scottroeder.com

And check out his photography here:
​www.​scottroederphotography.​com 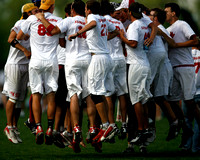