Behind the Camera: Teamwork by Brian Canniff

We had a strong team out at the Spinners vs Current MLU game on June 20.

Sean Carpenter and I were handling co-primary duty for the evening, meaning that we were responsible for getting some required shots for the league. Two other UltiPhotos shooters--Paul Andris and Jolie Lang (who is Operations Manager and, basically, our boss)--were also there to shoot and try out some new gear.

Sean and I always touch base before, during, and after the game to make sure that we’ve got the shots we need. 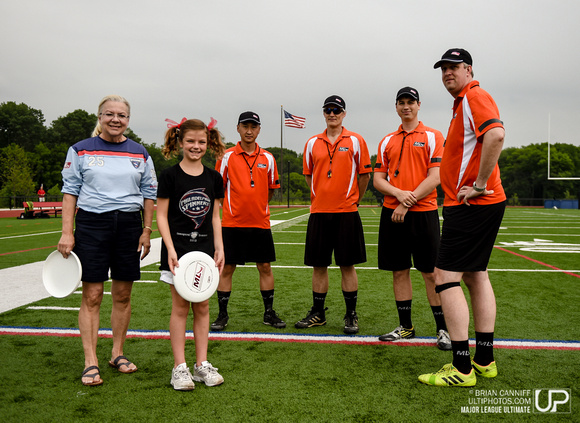 Members of the Philadelphia Spinners family pose with referees before the game.
Pregame, I lined up a shot of honored fans and refs preparing for the flip. After I got what I wanted, my friend, a ref, heckled me about missing what would have been a great shot behind me.
I knew I could let the team circle go in favor of my shot, because I had seen Sean lining up one of my favorite pictures of the day.

A pregame huddle between the teams was a nice show of sportsmanship.
On this next shot, I did not have time to get the framing I wanted.  Dustin Damiano ran over for a quick hug with his parents, who were being recognized as Spinners’ Fans of the Year.  I ran over to them and asked them to quickly turn around so I could get the crowd behind them. I noticed that Sean was close by, and he was able to get a clean shot of the group. Teamwork. 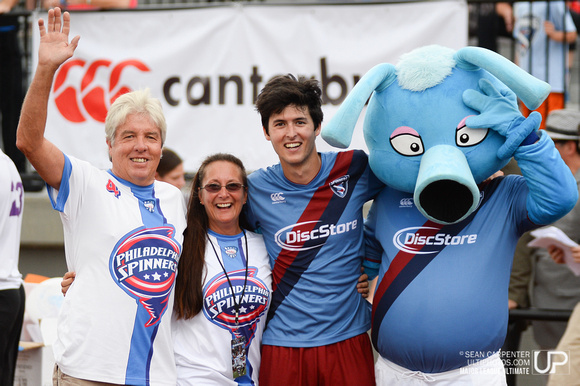 Fans of the Year with their favorite player.

As we were packing up, I saw this nice line with Jeff Snader, the Commissioner of the MLU. I didn’t have the reach to get the shot I wanted, but Paul Andris still had his new crop-sensor camera with a big lens on it. He snapped this picture just before Jeff turned away from us and handed off the little one. Paul’s shot turned out to be even better than what I had in mind. I love the profiles. 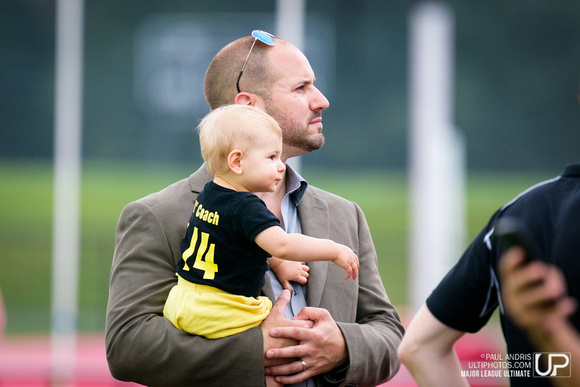 Of course we shot action, too. At one point Jolie and I were both shooting fixed 300mm lenses from the same side of the field--and we were both clicking away as the Spinners’ Michael Panna was fouled by an opponent. We both got decent shots. But Jolie was a little lower and closer to the play, and her shot of Michael’s fall was great, and better than mine. 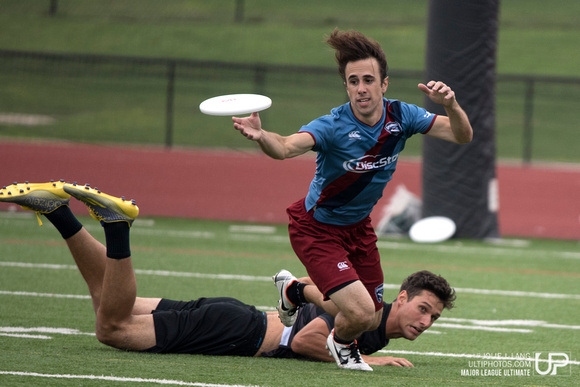 The Spinners' Michael Panna keeps his eye on the disc.

As I go through our team’s full coverage from the game, I am happy to see others get shots and angles I missed. Trey Katzenbach scored late on a short pass. I was cross-field and blocked from the shot; Sean got it. Delrico Johnson scored a few times, too. I missed some of those shots, but my teammates got them.

Having solid, reliable teammates grants you the freedom to look for additional shots and angles that you might not ordinarily consider. And it also gives you the confidence that someone will get the shot, even if it’s not always you.

So how does that help the solo shooter? Be your own teammate. Take a deep breath and work on an angle or a new type of shot for a few points. It could be a panning shot, a funky wide angle look, or a new technique for shooting in the rain. You’ll have plenty of time to get back into whatever your primary shooting mode might be.
Keywords: behind the camera, current, dc current, mlu, philadelphia spinners, spinners, team, teamwork
« Previous Post Next Post »

Production Companies Near Me(non-registered)
This is a very informative article. I was looking for these things and here I found it!
Jessica(non-registered)
SEO Link building keeps changing as search engines change their ranking algorithm. Therefore, a link-building company must keep itself up to date with the latest happenings in the SEO world. Some of the main changes in the 2010 SEO link-building list include the addition of website loading speed as a ranking algorithm. The removal of the extra SEO juice that GOV and EDU websites had has also affected link building.
azeem azam(non-registered)
We are offer to learn about complete Technical SEO checklist <a href="https://2blogging.com/2022/09/29/what-is-technical-seo-checklist-why-it-is-important/">Click here</a> which helps you get more organic traffic and also use for rank higher on google.
Ridden(non-registered)
We are offer to learn about Technical SEO audit <a href="https://https://2blogging.com/2022/09/29/what-is-technical-seo-audit-why-it-is-important/">Click here</a> completely which helps you to find the errors of your site and helps you to rank higher on google and make more organic traffic.
Ryzen(non-registered)
Community, Business, and Civic Organizations: Many network businesses, clubs, and businesses provide scholarships to college bound students. Check with any network companies [url=https://aioulogin.co/]https://aioulogin.co/[/url] which you are worried with and inquire approximately to be had scholarship programs. Examples of network groups consist of your neighborhood rotary club, chambers of trade, higher enterprise bureau, elks membership (or similar sort of membership corporations), or different network clubs and membership companies.
No comments posted.
Loading...