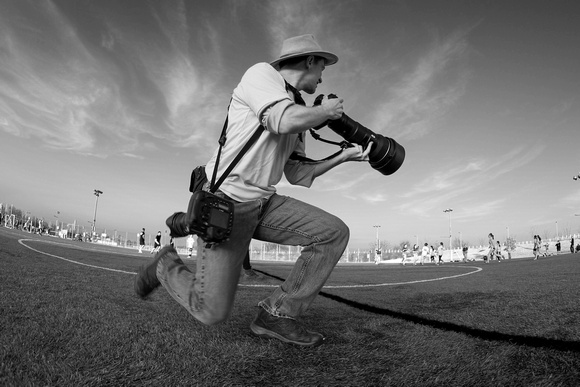 In a land long, long ago when film was all there was and before UltiPhotos was a glint in anyone’s eye, there was Rick Collins.  He sat on a milk crate at the edge of the fields and blew everyone away with how good his photos were.  Every year he made a calendar to support his habit, and they were glorious.

Then there was Bil Elsinger, who attached an umbrella to his stick when it rained and did a slideshow for the parties at Potlatch, Andrew Davis, who loved Superfly, the kind and talented Matt Lane.  Chasing Plastic was the only print outlet so it was a labor of love to shoot ultimate, and it was expensive.  If you got a sandwich or a t-shirt it was a really good day.

Neil Gardner came from New Zealand and brightened every field, Hart Matthews brought his media outlet experience.  Rick vanished, Bil left for law school, Andrew and Matt married their loves and the wheel went around.  I was about done myself, and in that vacuum appeared Kevin Leclaire and his brainchild, UltiPhotos.

His idea of collecting and organizing photographers, arranging for sensible compensation and handling all those tricky details was something I’d dreamt of for years.  When I finally talked to him I told him how I’d been chanting like a mantra that what we needed was someone with a degree from Harvard to pull this thing together.  His answer?  “Well, actually. . . .”

He has a degree from Harvard.

Sally Bruen(non-registered)
The accomplishments made by the Department of Philosophy are stunning. Just have a look http://www.sentencechecker.info/benefits-of-punctuation-checker-free-online/ i hope you will like it. It is a postponed outcome of this division, I am thinking to join Ryerson University.
Coretta84(non-registered)
The rabbits which you are revealing in this picture are enchanting and marvelous. Visit http://www.sentencecorrection.org/best-online-spell-check/ for getting wonderful info. I'm completely pulled in towards the wonder of these rabbits.
Sally Bruen(non-registered)
By edifying the hardest enigmas, they will figure out some approach to think and act like a young adult. Visit http://www.copychecker.net/text-originality-checker/ for more info. One thing to convince them towards this improvement is ti give them something after they have disentangled the requesting.
Coretta84(non-registered)
Sometimes, it is enormous for understudies to take such an assistance while doing educational undertakings. Click http://www.correctmysentence.com/how-to-use-online-paragraph-grammar-checker/ for getting more info. My companions dependably will everything contemplated select online sharp specialists to finish their unforeseen development.
Noble Kutch(non-registered)
Being one of the customers of Element, this senseless issue has moreover perplexed me. Once visit http://www.sentencestructure.org/how-to-check-whether-a-sentence-is-correct-or-not/ to do work at time. I'm charmed about knowing the riddle of this issue.
No comments posted.
Loading...