Behind the Camera: Shooting Emotion by Brian Canniff

Sometimes, it's a moment in between points that tells a story.

I was out shooting summer league this week.  There was action on two fields near me, but my eye was drawn to two old friends greeting each other.  Both are warm and photogenic, so I paused from shooting the action and got one of my favorite shots of the night. 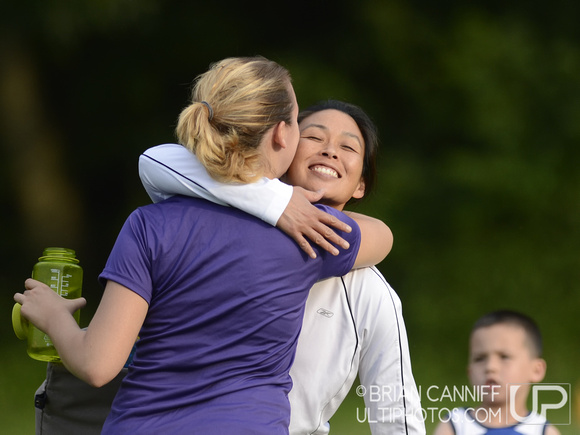 Elation shots are easy wins. They tell a quick story and they make people feel happy. Many of us are reserved and controlled when we are playing sports. But joy is contagious, and a photo of two happy people embracing each other seems to be the essence of ultimate.

Years ago, I took a picture of a friend who was smiling after a win at a club tourney. Sadly I saw it again at her funeral. Her father said, "We liked this shot because it was one the few we have where she was happy."  These shots we take are important.

But if elation is on one side of the ultimate coin, then defeat is on the other.

Last year, I photographed a dejected Mike Baer during a Philadelphia Spinners’ game. Brent Anderson (then with the Connecticut Constitution) had just fired a pass between Mike’s hands for a goal.  Mike was seething after coming so close to the block; Brent was sheepishly celebrating behind him.  This shot was a motivator for Mike, and his Spinners wound up winning the AUDL Championship. 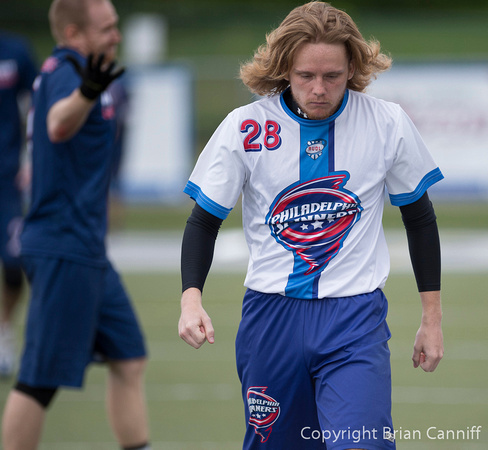 Shooting pain and defeat can be hard. It can feel invasive. At USAU Club Championships in 2011, I watched Ironside defeat Doublewide.  I was getting standard jubilation shots of the Ironside players when I saw a defeated Brodie Smith crossing my frame. 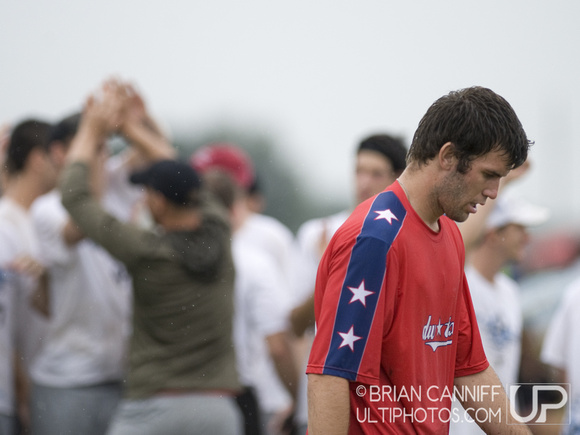 Brodie would eventually share that picture on Facebook. He said that it was his motivation, and his way of remembering how much he hated losing. Doublewide won Club Championships the next year.

Sometimes you see injuries, too. I think there's a line between bearing witness to pain and exploiting it.

At winter league, I watched a collision that opened up a player’s head. There was lots of blood. I shot the play, and I shot him on the ground. I was not comfortable with the latter.

But I did like one image: it was the blood-covered hands of a woman who put pressure on her teammate’s wound.  No gloves, just love. She put herself at risk for a teammate.

These moments tell stories. They may not all be happy ones, but they are all authentic, and they all speak to the humanity of the people who play the game.

AlyceRyan(non-registered)
I am very glad to read this informative article. http://www.google.com
Top Gun 2 Tom Cruise Jacket(non-registered)
Real Jacket is the largest online store and eminent style site that offers you the highest caliber and inventive with crazy touch-ups in addition to incredibly planned cowhide items & <a href="https://rjackets.com/product/top-gun-2-maverick-jacket/">Top Gun 2 Tom Cruise Jacket</a>
Batman Jacket(non-registered)
It's a nice blog post. I really like it and the amazing flow of content also helps me more to understand the blog post
do my assignment for me(non-registered)
The post is really superb. It’s varied accessory information that consists during a basic and necessary method. Thanks for sharing this text. The substance is genuinely composed. This web log is frequently sharing useful actualities. Keep sharing a lot of posts.
earth zac efron jacket(non-registered)
It is good to hear that your store is now expanding to new locations. I have been a patron of Fantastic Eyes because of all the wonderful work that you guys do. I hope that this expansion move of yours will turn out to be successful. I will definitely go and see this new store of yours
No comments posted.
Loading...