Behind the Camera: The Ecstasy and the Agony by Scobel Wiggins

There hasn't been a tournament yet that I've walked away from without a moment of absolute anguish over the shots I missed.  Usually I sit quietly in the car for the storm to rage and dump before I can pick up the pieces and go on.

At that moment there is no solace afforded by the shots that I did get, because I haven't seen them yet. The mirror flips up when the shutter opens.  The moments I catch are the ones I don't see.

Every game is a loss, with no one to blame but myself. 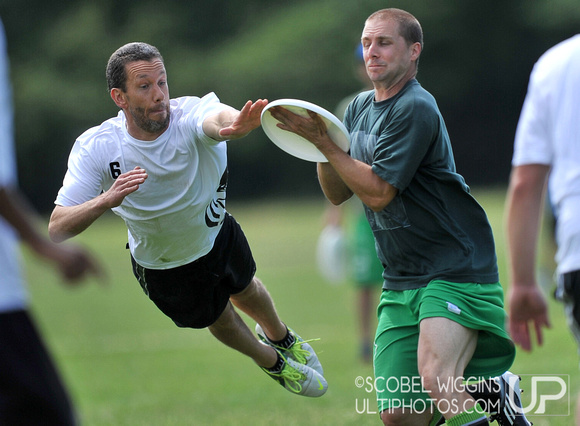 It took me six years to get a layout coming toward me.  I wanted that shot so bad. It looks so simple from the sidelines, but to the camera it is a perfect blur. With the narrowest possible depth of field, it takes a little magic to catch it. 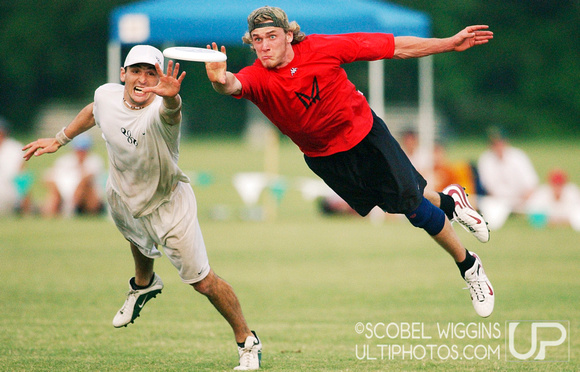 Seth Wiggins of Oregon's Ego and Chase Sparling-Beckley of Carlton fly for the grab in the semi-finals of 2003 UPA College Nationals held in Austin, Texas.

My first thought after taking this shot of my son was that pregnancy was worth it because I knew when that boy was going.  It was just lucky that the other best face in ultimate was the trigger.   It was a superhot game at the UPA's 2003 College Nationals and I was on the sideline with the legendary photographer, a true inspiration and a mentor, Hart Matthews.  We both got the shot, but I was there a fraction of a second before him.  That's all it takes to make the difference.  I still feel for him.  Seth hates this shot.  Le sigh.

This shot at 2007 UPA Club Nationals is another full-on layout.  I knew I got it, and I was so excited I couldn't stop shooting.  I was as surprised and gratified as everyone that I got to witness this epic demonstration of spirit. Talk about lucky!

But the truth is I dump almost everything.  I shoot 1000 frames a game, and cut them down to 35.  That's 965 that are taunting me with what a wipeout I am.  There are so many ways to mess up, and I think I've done them all.

If you are crushed that a bystander moved into your way, beat up by a glitch you did not see coming, or flattened because you came so close and still missed it— smile buddy, and welcome to my wheelhouse. To our wheelhouse. You are one of us.