Behind the Camera: Make Your Own Luck by Brandon Wu 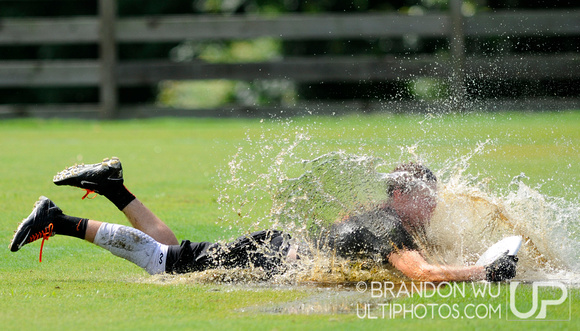 Back in the day, I was a decent college Ultimate player, but I was inconsistent. Sometimes, everything seemed easy and the game came to me; but in other games, I was basically invisible –no matter what I did I couldn’t seem to make an impact on the game. Thankfully, over time I figured out how to consistently contribute to my teams’ efforts, particularly at high-stakes moments. Even if one aspect of my game wasn’t clicking, there were other things I could do to make a difference.

I’m no longer playing competitive Ultimate, but I feel like I’m in the college Ultimate phase of my Ultimate photography adventure. Sometimes it seems like I barely have to do anything and the shots come to me. The first day of this past weekend’s US Open was pretty much like that – one of my first shots of the tournament was a huge layout grab by Ian Toner of Ring of Fire that landed him directly into a giant puddle of standing water. And the shots kept coming – somehow I seemed to be in the right place at the right time over and over again. 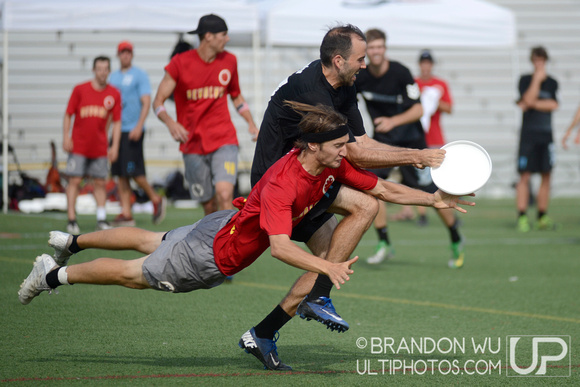 One of the few good action shots I got late in the finals: Ironside’s Danny Clark holds on against tight Revolver D.

By Sunday, it seemed my luck had run out. Particularly in the highly anticipated men’s finals between Revolver and Ironside, I just couldn’t seem to get a break. All of the exciting plays were happening across the field, and twice I missed focus on ones that happened right in front of me. It was the biggest game of the weekend in the men’s division and I wasn’t getting any good pictures.

Far too late in the game, I decided I had to make my own luck – if the plays weren’t coming to me, I needed to go to them. I started chasing the action, switching sidelines and at times actually following the disc as it moved up and down the field. I realized that even if the big exciting shots weren’t there for me to grab, I could still make some creative shots away from the action. This worked reasonably well. I finally started getting some decent photos, and ended up with some keepers despite a rough first half.

While there are always things outside your control as a sports photographer, a combination of careful planning and a willingness to chase the action can tilt the odds in your favor. I’m still learning that lesson. 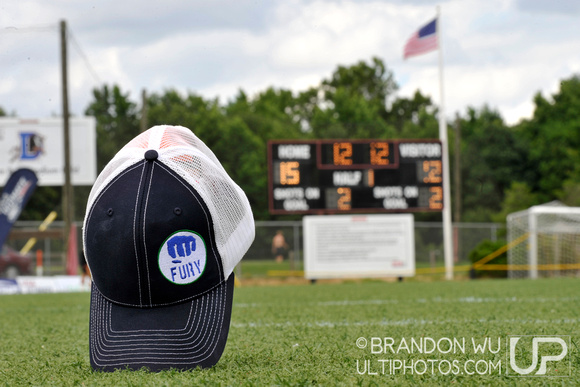 I saw this Fury hat propped up on a water bottle with the scoreboard in the background, and it couldn’t have been better if I’d set it up myself.
Keywords: behind the camera, brandon wu, catching the moment, luck, lucky, make your own luck, ring of fire, us open
« Previous Post Next Post »

James Hiol(non-registered)
It's easy to get caught up in the excitement of the moment and forget that filmmaking is a very competitive industry. That's why it's important to make sure you're always prepared for what comes next. You can't win if you don't play. If you want to get into the film industry, there are many opportunities available to you. Now you can visit http://uk.bestessays.com/law-essay-help.html website for help in your law essay. Whether it's working on set or making your own productions, there are plenty of ways to make your career more successful by using your skills and talent in creative ways.
dissertation service(non-registered)
If you know me, you know that I've always been a big fan of Brandon Wu. He does great work, and he's also a really cool guy. Brandon Wu argues that we have much more control over our luck than we realize. He provides readers with practical, actionable steps they can take today to drastically increase their chances of making their own luck.
No comments posted.
Loading...