Behind the Camera: The Big Game by Kevin Leclaire

When I volunteered to write a blog about the MLU Championship game, I had a good idea of what I wanted to talk about.  I wanted tell a story about what it meant to be covering the league’s first championship game as part of a team of four great photographers and memorializing the event for all time.  I wanted to talk about shooting with a great crowd in the background, and striving to not just get the perfect action photo, but to cover the entire championship atmosphere: fans, the band, the player introductions, the half-time locker room speech, the great venue, the trophy presentation, and the victory celebration that would surely follow.

And then sometimes the story takes itself in an entirely unplanned direction.

You don’t have the luxury of taking half a round to warm up when photographing a single game.  Fortunately I was shooting alongside UltiPhotos’ photographers Brian Canniff, Sean Carpenter, and Jolie Lang.  We didn’t have to wait long for the thrilling plays to commence. On the first point of the game Teddy Browar-Jarus got a sick D right in front of me; when I got the shot, I knew I was in the zone. 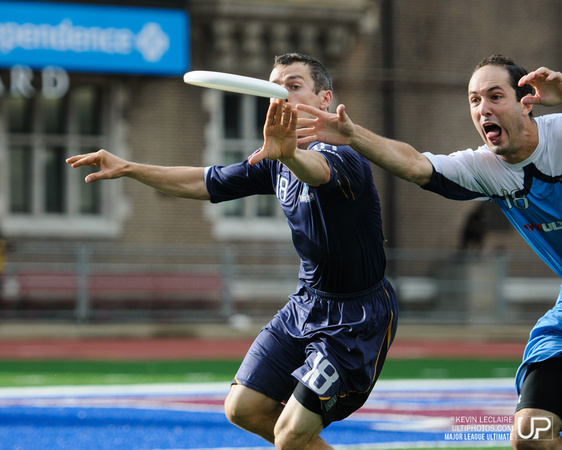 Teddy Browar-Jarus zeroes in on the disc just before getting the end zone D that led to the Whitecaps first break of the game.

When shooting any event, you have to be prepared for the unexpected.  And that moment came in the third quarter when Andrew Hagen of the Dogfish made an incredible catch between two Whitecaps flying in from opposite directions. The ensuing collision left a Whitecaps player on the ground with a serious-looking injury.

I was shaken by what I had seen through my lens.  When an injury such as this occurs, it can become difficult to bridge the gap between the personal relationships we have with the athletes on the field and our roles as photographers covering the event.

With a lump in my throat, I recognized the player on the ground as MLU and Whitecaps star Jeff Graham.  I have known Jeff since his mixed club team, the Ghosts, competed at the Chesapeake Invite; he is not only a phenomenal player, but is very friendly and approachable off the field. My thoughts leapt to his parents. I had just chatted with his father earlier that afternoon, joking that if the team bus was late, we’d have to suit up and start for the Whitecaps. I could only imagine what they were feeling in the stands.

I thought about the teammates who never left his side, and the rest who were visibly upset.  And I was thinking about the league.  The MLU, in its inaugural championship game, was facing what could be a league-defining moment from a freak collision on the field.  It seemed patently unfair that the worst-looking injury I had ever seen in 17 years of playing and watching Ultimate would occur during this historic moment.

But also racing through my mind was a classic photographer’s debate: “Should I lift my camera and take a picture?”  Out of respect for the injured player, I wanted to keep my camera lowered, but a photographer’s role is to document the event in its entirety.  Photojournalists might have a different filter on what’s acceptable than event photographers, but ultimately, we all face an ethical decision on what to post. I made the decision that I wasn’t going to post a photo of Jeff lying on the ground in those circumstances.

This story has a happy conclusion. We were glad to hear at the post-game party that Jeff was itching to get out of the hospital to join the celebrations.  And when he did arrive, he walked in as the captain of MLU’s first championship team. 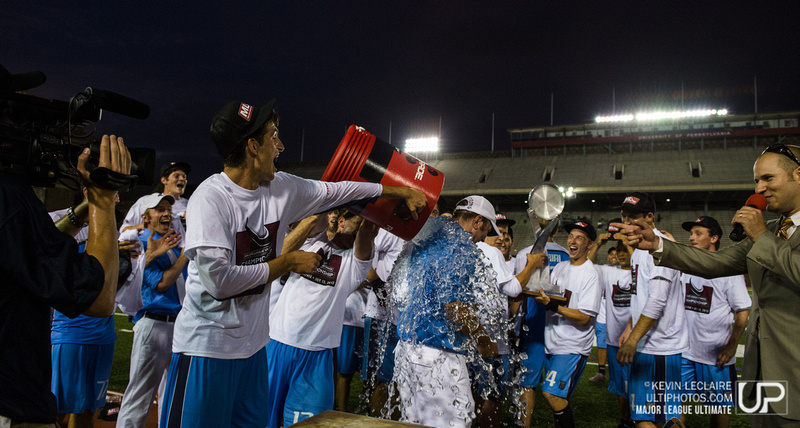 Henry(non-registered)
In the world of sports, there are few things more important than a championship. I would love to visit http://bestwritingsclues.com/reviews/essaywriter-review/ website for reading the best reviews. There’s nothing like being on the winning side of history, and there’s no better feeling than putting your name in the record books as a winner.
free robux 2022(non-registered)
The latest version of free robux of 2022 is now available and the users gain complete access when they generate this free robux as this is highly secured and easy to install.
best resume writing services online(non-registered)
Music is a very powerful healing subject that is being used for ages. It is also the best form of entertainment for relaxation, communication, and enjoyment. Music can create very deep emotions in humans.
John Nicholson(non-registered)
Kevin -

Thanks for the insight into the process. As someone who holding his breath in the stands with everyone else through those long minutes, I think you made exactly the right ethical decision. Too often the media looks for the most graphic images and hides behind the argument that they're just there to document the event.
Gavin Baker(non-registered)
Nicely written, I love the pic with the thumbs up. Well done!
No comments posted.
Loading...