Behind the Camera: Wildwood by Burt Granofsky

There are tournaments. And then there is Wildwood.

For the uninitiated, Wildwood Beach Ultimate is the biggest such tournament in the world. This year there were an estimated 5000 players--on 450 teams!--hucking and bidding on the south Jersey shore. Wildwood is able to accommodate so many teams because the beach is gigantic; standing at the boardwalk, one can see row upon row of lined fields heading towards the surf. (Individual pictures of the beach don’t really do the sight justice. The only way to get a shot of all the fields is via helicopter, since a massive pier separates the two main playing areas.)

I first played Wildwood in 1999. And I've come back almost every year since, despite the horrendous traffic that any shore weekend brings. The tournament is simply too fun to miss. There's competition, sure. But there's also camaraderie--players go all out, and they pick each other up out of the sand after a bid falls just short. The whole weekend is a celebration of sand and summer and ultimate and the good life.

Wildwood is arresting from a sensory standpoint, too. All the games take place in the shadow of boardwalk attractions. So while you are watching a teammate sky for a disc, you may also hear the screams of teenagers riding a rollercoaster high above the piers, the rails going clack clack clack whoosh underneath.


And though the ultimate world descends on Wildwood for one weekend, the tournament is not the only thing happening at the beach. Regular beachgoers must wonder what they have stumbled onto as they lug their umbrellas, coolers, and kids past all of the action. (Sometimes they even stop and watch.) The boardwalk itself is where the most mingling takes place: sandy teams and ill-dressed teens each striding along the wooden boards like they own the place, sharing space at one of the 17 Hot Spot restaurants, everybody avoiding the tramcar, please. 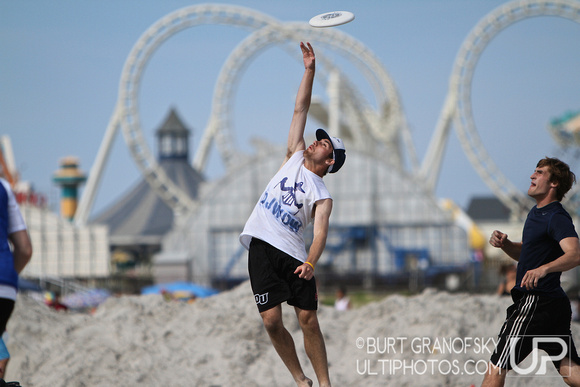 The roller coasters on Morey's Piers make for great backdrops.

I braved the sand and brought my camera this year. I wanted to try to capture some small corner of the scene, even though I knew I would not be able to do the full weekend justice. There's simply too much to cover--the craziness of team registration at the Bolero on Friday night, the 100+ fields of action, the vendors, the scene at the Saturday evening beer garden, and players doing layout drills into hotel pools up and down Atlantic Ave.


Plus, I had some games to play. Despite a bum shoulder and a mental pledge to take it easy this year I laid out on my first point, catching a 2-pointer and rolling through two innocent spectators. (They were fine.) Re-introducing myself to the sand was fun, and I proceeded to spend most of Saturday forgetting my earlier pledge, looking for any way possible to get horizontal. Wildwood has a way of coaxing you into making bad decisions. Also: Advil is a wonderful product.


I was much slower on Sunday. After one win and one loss we were done, a long way from any hardware, even in the Div III beer bracket. No matter, though--Wildwood had delivered, again, and I’ve already circled the dates for next year. 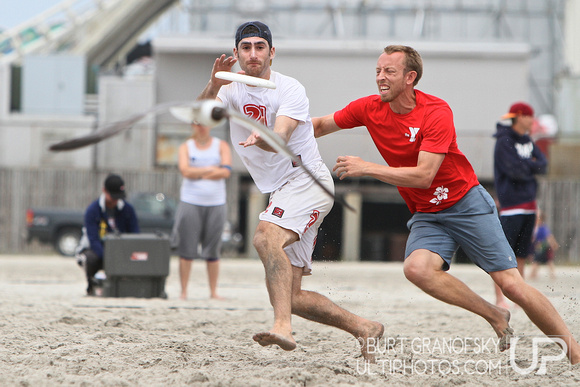 Ole Weber(non-registered)
Everything considered joined the IE School of Architecture to fulfill my dream about getting possibly the most facilitator. Check this http://www.sentencecorrection.org/best-online-spell-check/ to make error free work. This is the best foundation that can help me in doing in like way.
Noble Kutch(non-registered)
A commitment of appreciation is all together for picking the working strategy of AutoPAY pack. This http://www.correctmysentence.com/change-my-sentence-around/ will very useful for you. I have learned required things a short period of time prior.
Noble Kutch(non-registered)
Satisfied to see that you are in the end making a record that would isolate the verifiable setting of a blending performer. Visit http://www.grammarcheckeronline.org/proper-grammar-check-when-to-use-a-comma/ for more info. I would watch it.
Noble Kutch(non-registered)
I wish I could get a chance of planning at the University of Oregon. Students can visit http://www.sentencecorrection.biz/adjective-in-english-text-correction-online-free/ for more info. In any case, strikingly, the clarification for setting new things is astoundingly insane.
Coretta84(non-registered)
You have depicted remarkably fabulous things about the Dartmoor in this article. You can visit http://www.sentencechecker.org/how-to-write-attention-grabbing-persuasive-sentence-starters/ for more ideas about how to do this work. Truly, I am totally amped okay with watching this amazing city now.
No comments posted.
Loading...