Behind the Camera: Finding Focus at YCC by Alex Fraser

I have a soft spot for the Youth Club Championships. As an ultimate player, I love watching the energy and enthusiasm that the players, coaches, and parents bring to the fields. As a coach, it’s great to watch these kids self-officiate and respect each other and the spirit of the game. As a photographer, YCC was the source of my first photos that were ever published, in 2011, and has given me some of my personal favorite shots in my UltiPhotos portfolio. With the tournament yet again in my home city of Minneapolis, and the chance to work with fellow talented UltiPhotos photographers Christina Schmidt and Nick Lindeke, I was very excited to provide coverage for UltiPhotos and USA Ultimate this past weekend. 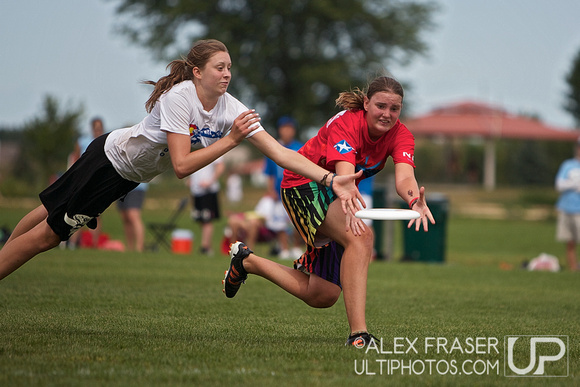 Still, that’s not to say that taking photos at YCC is a breeze (even beyond the fact that standing out in the sun and working for 10 hours is grueling no matter how much you love a tournament - and photographers don’t get byes!). Especially on Saturday, where the short 75 minute rounds and often disparate talent levels between teams made it challenging to provide the comprehensive coverage of ALL the teams that we strive for at UltiPhotos when we provide official tournament photography. On top of all that, I had one of those weekends where I fought my equipment and instincts, frequently finding myself reacting late to a play and/or missing focus on a crucial shot.

It’s hard to fight off frustration as a photographer in these situations, even knowing that photography is much like playing - my tens of thousands of ‘reps’ taking photos means I’m likely to recover and start getting those great shots if I just keep my focus. This is where YCC makes it easy to rally. All I needed to do was take a deep breath and look around... kids of all ages (and even some parents) playing ping pong in the Spin Ultimate merchandise tent, and Spikeball outside of it. All of the teams taking the time between rounds to cheer their opponents, and mug for team photos. I was also lucky enough to watch my girlfriend coach her first YCC team. That, coupled with the constant banter* and appreciation that the players show when we’re on the sidelines, makes it easier to keep at it. 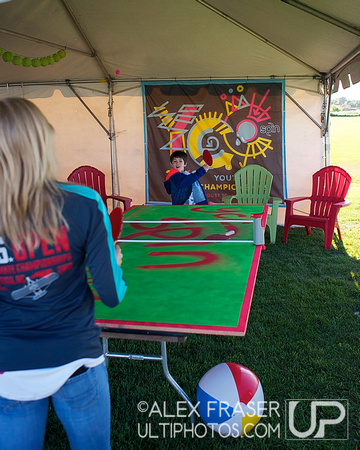 Sure enough, when I started editing my highlights on Saturday night, I was very happy with the shots I’d gotten, even knowing how many I’d missed. And even though I continued to fight my equipment on Sunday, my effort was rewarded with several shots that I’ll happily add to my UltiPhotos portfolio when I’m done editing, and what is possibly the best shot of my young career so far - a layout catch for a goal on double game point that happened mere feet in front of me. It should also be noted that the catch was disputed, and that the players for both Seattle and Boston acted admirably, and with great respect for each other considering what was at stake, and resolving this, eventually sending the disc back to be replayed. It made me proud to be a player and coach of this great sport of ours.

So thank you, YCC. Let’s do it again next year!

*Oh, and for the group of kids who asked me if I was Kevin Leclaire, I’m still not. But he does exist, I assure you. 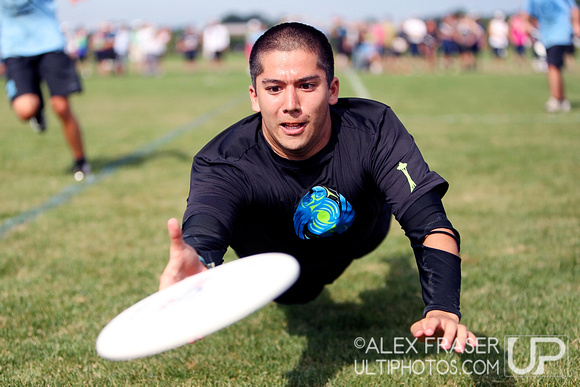 Jeo(non-registered)
You are thoroughly correct that downloading a better than commonplace instructive programming like games which should be tranquil and colossal is dull new turn of events. I will have to visit http://www.toppaperwritingservice.com/review-advancedwriters-com/ website for help in my essay. In any case, around the end it gets ordinary things the kind of broadening the energy of youth.
zety reviews(non-registered)
New York where she teaches courses on bird behavior and photography. She is also a Senior Fellow at the Cornell Lab's Center for Conservation Social Sciences (CCSS) where she does research on citizen science as well as communication strategies to engage people in conservation.
Garrett Dyer(non-registered)
I remember teasing Kevin at Fools once, saying "why wasn't a picture of me in the highlights from yesterday?", to which he said "sometimes I have bad games too". Hadn't really crossed my mind before that.
No comments posted.
Loading...