Behind the Camera: The Challenge of Expectation by Alex Rentzis

It is often said be careful of what you ask for. In my case, I asked for and received the chance to shoot my first Ultimate tournament for UltiPhotos.

The path to this assignment is long and winding, and started with me playing Ultimate in New Jersey in 1981. It continued when I picked up my first SLR camera shortly afterwards. Both the camera and Ultimate have been part of my life since then although my competitive Ultimate phase finally came to rest during the mid 1990’s. The camera, not being as demanding on my body as Ultimate, still accompanies me today. However, I quickly found out that it was my mind, not my body, that would be an issue for my first assignment. 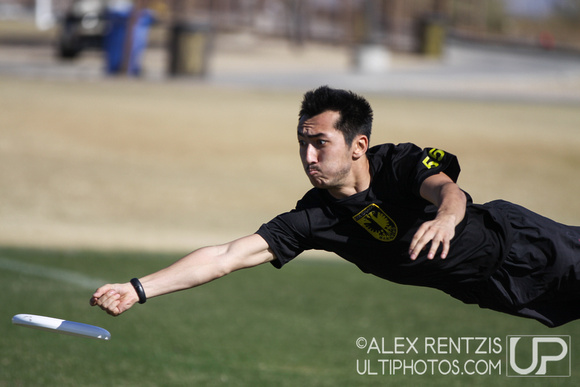 My first tournament shoot often felt as frustrating as this near catch.

The assignment I was granted was the 2014 New Year Ultimate Festival (NYF), a tournament in its 32nd year. I had been part of this great tournament in Phoenix, Arizona for the first seven years of its existence as a player. Now my point of view had changed and I would be telling a story from a photographer’s perspective.

The day of the shoot came, and for the first two hours after the curtains drew I felt like a Broadway stage actor in full costume with nothing to say. Shot after shot, miss after miss, blur after blur. This was  the lowest feeling that I had ever experienced in my photography career.

During the NYF mid-day break, I found a quiet spot to do some interrogation of my photo skills and to refocus my mind on all the tips that I had absorbed during my tourney preparation. I reviewed many of my shots and decided to try some different angles and take advantage of the beautiful Arizona scenery as a backdrop to the action. However, it was the words of a fellow photographer at NYF that gave me the real direction I was striving for.

“Alex,” he said. “You are not looking like you are having fun.”

This was my eureka moment. Was it that obvious to others? I latched on to the word “fun” and used it as my inspiration to let my artistic instincts take over. By the tournament’s end I delighted in knowing that I did receive what I had asked for! 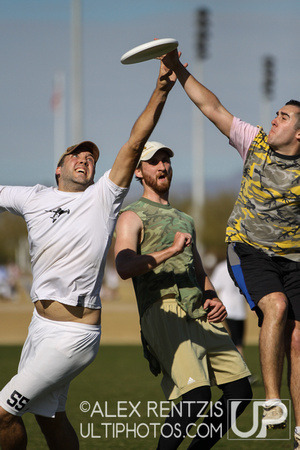 As ‘fun’ took over the action was there for the taking.

Late on Sunday, after I had published my highlights gallery, I reviewed some of the emails I had exchanged with the UltiPhotos staff in preparation for the shoot. To my amazement there was that word fun again. “Have fun during the shoot,” many of them had written.

The pressure of expectation can often overwhelm the power of instinct. My first tournament shoot will not be the last time I experience the pressure to produce top class action photos. But one thing that I will strive to keep as my ever present mantra will be the words: “If you have fun doing it the rest will follow.” 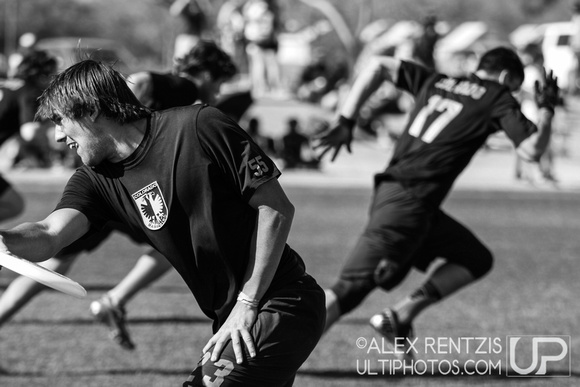 B&W takes photos to a more abstract emotional level which suits my style.

Alex Rentzis is a professional photographer in Arizona. NYF was his first assignment for UltiPhotos. Find more about Alex at SpartaPhoto.com.

Masala Manufacturer Company in Bihar(non-registered)
I am glad to find this great article today its is very helpful and useful blog I have found today.
Free vpn Vs Paid vpn(non-registered)
I would like to give you a big appreciation for your tournament. I have read the blog that is about your match and yourself.
VeePN(non-registered)
I have watched various photography sites and I must say you have such a unique way to introduce your creativity with your photos. Do you finding a VPN that can easily fit into your budget, that you can also get after visiting this link http://www.vpnblade.com/deals/veepn-coupon-code/ so just visit the link and get this at cheap.
Noble Kutch(non-registered)
Much vague from you, I am other than astoundingly captivated with keeping bunnies in my home. One hire this http://www.sentencestructure.org/sentence-structure-errors-4-ways-to-avoid/ to do work at time. It would be my pleasure to keep your enchanting rabbits at my place.
Noble Kutch(non-registered)
This whole change isn't sensible for me since I am charmed about the extraordinary condition. Click http://www.plagerismchecker.net/free-plagiarism-checker-for-everybody/ to check mistakes in your work. It would be way much better on the off chance that you depict things in a blueprint.
No comments posted.
Loading...