Behind the Camera: Out in the Cold by Sandy Canetti

With the Major League Ultimate season set to start at the end of April, the eight teams have begun the process of holding tryouts to build their squads.  What makes the process challenging is the fact that in order to have squads in place for the start of the season, tryouts take place during the heart of the winter. For the Eastern Conference teams, subfreezing temperatures and the threat of snow can create quite a challenge. In most cases, tryouts can be held at indoor sports facilities. But in New York, the availability of indoor fields is low while their pricing is prohibitively high, leaving the teams no other choice than to hold tryouts outdoors. 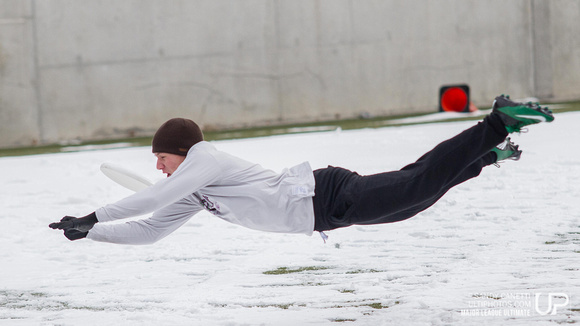 Ryan MacFadyen heads into the snow on a missed layout attempt

The New York Rumble held two open tryouts in December and then two invite-only tryouts in January. I attended three of the four. I am not a fan of cold weather to begin with, so I was wondering what I was doing on Randall's Island on a cold Saturday in January when I could have been indoors watching my Tottenham Hotspurs take on Sunderland in the comfort of my own home. It had snowed recently in New York and there was still snow on the ground, although the site was clear enough to be able to lay out an MLU-sized field for the scrimmage.  By the second tryout on January 17, the snow had all but disappeared despite the fact that the temperatures had not climbed above thirty all week. 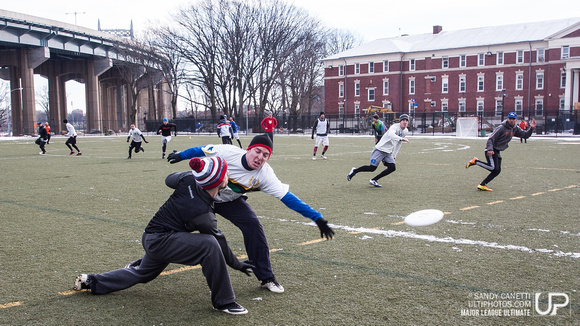 Modern science and the advance of weather protective materials have come a long way in helping protect athletes from adverse weather conditions, while not over encumbering them in their movement. But cold is still cold. And for a photographer the weather creates all sorts of challenges.  So here I was, ready to shoot the tryouts wearing three layers of Uniqlo and Under Armor under my winter coat. I had thin gloved fingers sticking out of my finger-less mittens. (I had a tried pair of touchscreen gloves, but found them too thick to properly handle the controls of my Canon 7D.)  I also had a balaclava to keep my head warm. I was definitely not a candidate for GQ, but I believe in function over fashion. The weather during the second tryout was surprising more comfortable despite the fact that temperatures were in the twenties. (The sun was out most of the day and there was no wind--this made a huge difference.) 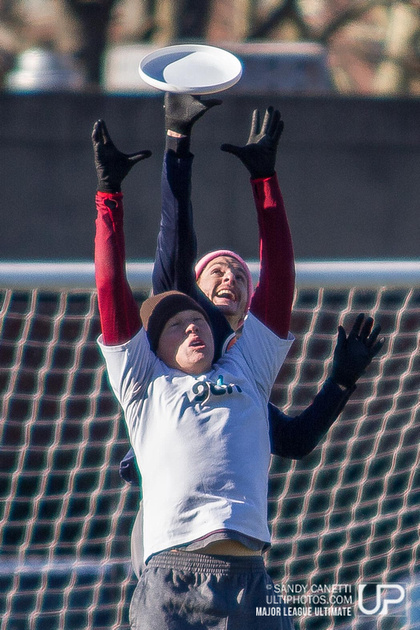 Austin Bonelli get the D on Ryan MacFadyen

Shooting tryouts offers a number of opportunities to tell a complete story. While most of the action comes during the scrimmages, warm-ups and drills offer a chance to add different types of editorial images to the coverage. Of course in the cold and snow, you have even more opportunities to tell a story--the challenge is keeping your mind (and body) focused enough to capture those shots. I love the winter sun. You get great shadows in the afternoon, and cloudy days create a softer, even light, with low contrast. The light is beautiful and soft, as opposed to the harsh midday light of summer.

The tryout process is over now, at least for the Rumble, and I look forward to the start of the season. Hopefully I will have thawed out by then.

Basement Repair Salt Lake City(non-registered)
This is a very informative article. I was looking for these things and here I found it!
top resume reviews(non-registered)
In this powerful and moving memoir, Sandy Canetti shares her experiences filming Out in the Cold, a film about her father's life as a Holocaust survivor who immigrated to Canada after the war. The book tells of how she was able to find out more about her father's past, and how she was able to make amends with him after years of estrangement.
redovnojro(non-registered)
The nice thing about essay writing service evaluations is that they are objective.
here(non-registered)
in the mountain area? It is a beautiful picture. The man is enjoying snowfall in the mountain area. He looks like to stay there for ever and never to return home. It seems that he is at peace with nature, if you can call it that way. Nature includes all natural objects as well as other living organisms such as plants and animals, also known collectively as ecosystem.
No comments posted.
Loading...