Lei Out by Daniel Thai

When the calendar flips from one year to the next, the thought of January often brings to mind cold, dreary days spent inside with a warm beverage. For me, however, January brings anticipation for the sun and sand of southern California. After New Year’s, all I can think about is Lei-Out.

Lei-Out is a beach tournament that offers a respite from the winter for many. This year, the tournament brought 276 teams and 3,000 players from across the country to almost 2 miles of Santa Monica beach. It’s an amazing sight to see the rows of fields and flying discs with the famous Santa Monica Pier as a backdrop.

For me, Lei-Out is special because I get to play with many of my college friends. This was only my second Lei-Out, but our team, Beaches ‘n’ Cream, has been attending since 2011. It’s hard to coordinate schedules and find a convenient reunion location for so many people, so we use the tournament as a solid date around which we can all plan. What better place than the beach to make new memories with old friends? 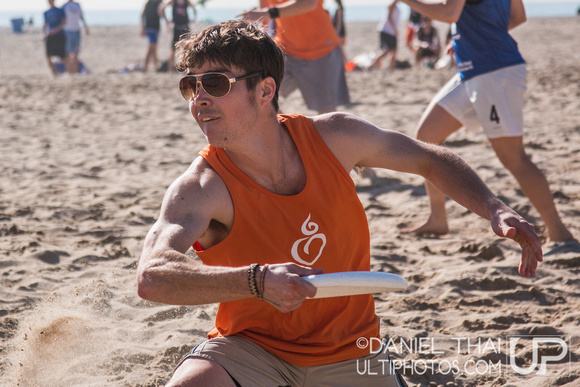 It's always nice to spend some time in the sun with Beaches 'n' Cream.

Last year I came only to play, but in the past year, I’ve focused on improving my ultimate photography. Consequently, I debated whether to bring my camera gear. On one hand, Lei-Out could provide the challenge of shooting on a new terrain as well as documenting a memorable weekend with my friends. On the other hand, I tend to forget about shooting when I’m playing and goofing off, which means I would be carrying a heavy bag across the sand for naught.

I compromised, bringing my camera but only arming it with a 28-135mm f/4-5.6 -- not generally my action lens of choice. I chose this set up for two reasons. First was convenience. I didn’t want to expose a lot of gear in the sand after possibly (read: most probably) having a few adult beverages throughout the weekend. Second was the fact that I wasn’t planning any serious coverage. I just wanted to have a versatile lens to capture some casual snapshots of my friends during a special weekend.

Throughout the weekend, I had gotten a handful of photos of Beaches ‘n’ Cream. Not spectacular coverage by any means, but more than adequate enough to catch some nice action and remember good times. After we were finished playing on Sunday afternoon, we headed to the showcase fields to enjoy the last remnants of sun and beach before we had to head back to our respective non-beach homes.

We were treated to an exciting finale between the USA Mixed and Mixed Masters teams, and, of course, my photographer’s instincts kicked in and I watched the game mostly through my lens. The action was great (as was the impromptu Taylor Swift dance party during halftime), and I actually liked being limited to more depth of field (compared to when I routinely shoot wide open at f/2.8) in these photos. The spectators surrounded the field right on the sidelines, and having them in slight focus seemed to help add to the atmosphere. Their reactions as players laid out and skyed added another layer of treats in some shots. 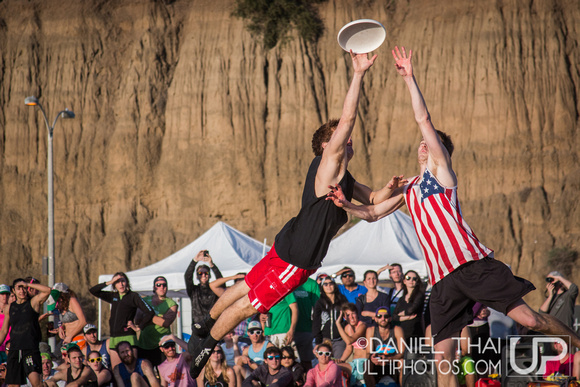 The beachside cliffs served as a nice, clean background for intense aerial action during the finals.

For Lei-Out 2015, I had planned for another raucous weekend with old friends. We successfully accomplished that point, but in the end I also found a laid-back opportunity to continue improving my photography.

CBD Oil For Anxiety(non-registered)
This is a very informative article. I was looking for these things and here I found it!
www.bestcustomessay.org(non-registered)
Ontario International Airport is located just outside Los Angeles, which means it's a great option if you want to avoid the high fares associated with LAX. The airport is also only 45 minutes away from Disneyland, so it makes sense to fly into ONT before visiting the happiest place on earth.
rapid essay(non-registered)
As a last resort, incited photography is on an essential level identifying with an affiliation. Regardless of how the rule picture is an accurate picture of this current reality, that picture is commonly changed using electronic instruments to reflect the photographic pro's contemplations and theories.
No comments posted.
Loading...